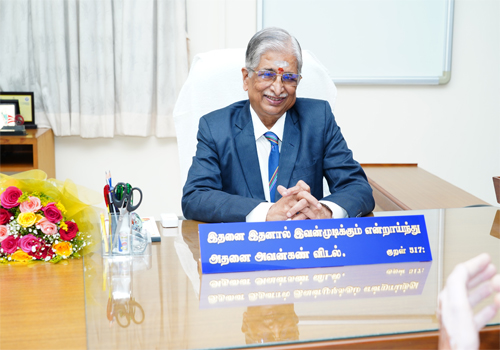 Prof. S.P. Thyagarajan, the Former Vice Chancellor of Madras University, Professor of Eminence & Dean (Research), Sri Ramachandra University, Assumed charge as Chancellor of Avinashilingam Institute for Home Science and Higher Education for Women (Deemed to be University) on the forenoon of 10.12.2020.

Prof. S. P. Thyagarajan is a D.Sc. in Microbiology in addition to his Ph.D. and M.D. Degrees. He has also been conferred with several Fellowship titles including those by National Academy of Sciences and National Academy of Medical Sciences. He has put in 51 years of teaching and research experience in Tamil Nadu Medical Colleges, University of Madras and Sri Ramachandra Institute of Higher Education and Research (Deemed to be University). He has completed 60 Research projects funded by National and International funding agencies with grants over INR 50 crores to the institutions where he has served. He has published 347 research papers and 20 books in the areas of infectious and non-communicable diseases like Hepatitis, HIV, H1N1, COVID-19 and Diabetes/Life style diseases, besides Drug-discovery projects. He has guided 32 Ph.D. and 12 Post Doctoral Research.

The awards of Excellence includes

Dr. S.P.Thyagarajan has served in several administrative positions in Madras University as :